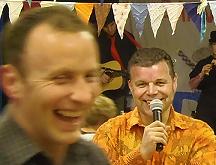 I’ve just returned from a tour of the US where I have been both calling and dancing.  One of the things that struck me during my time there are the differences between their approach and ours:  Dances run longer (14-18 times through), are generally simpler, almost always have partner swings, and the caller is expected to shut up after a few times through so the dancers can enjoy the band.  More striking, and the focus of my column this issue, is their approach to gender neutrality.

Traditionally many forms of folk dancing (Squares, Contra, Ceilidh, Playford) have defined roles that are referred to as Gents and Ladies, which were danced by men and women respectively.  As social and demographic changes meant more women danced than men, it became acceptable for women to dance the Gent’s role, but not vice-versa.  With the onset of gender equality in society as a whole you now find men dancing as Ladies, but only occasionally and usually by younger members of the dance community.  With the modern social trend of movement away from binary gender identification and towards a more fluid approach it is perhaps time we at least caught up with “dance whichever role you want”.

There has been much correspondence on SharedWeight (a callers’ discussion group) about how to move away from the traditional, gender focussed names we assign to roles.  Popular suggestions include Jets & Rubies and Leaders & Followers.  All have pros and cons, and so far there are no generally accepted new terms.  Many suffer from still having Male and Female overtones (which of Jets and Rubies would you say was “Male”?) as well as similarity to other terms that a caller might use (lead and follow, for example).

One of the difficulties of making the switch is that dancers need to know what role they’re dancing.  Even if you replace “Ladies Chain” with “Chain”, the dancers need to know which of them is expected to initiate the move.  If dancers are going to swap roles during an evening, which must surely be the goal of true role independence, they need to be comfortable with dancing both roles, and always aware of which role they’re currently in.

In the US the approach to this takes many forms.  At an advanced contra session at the wonderful Glen Echo, my first two dances were with men, both of whom asked me to dance.  The dancers have a wonderful phrase “Dance with whoever’s coming at ya” - in other words trust the people you’re dancing with to get it right, so don’t flinch if a man comes towards you in a chain.  This has led to a practice of “switching”, where a couple will change roles at different points during the dance, often after a swing.  This is quite fun to do, and I had one memorable dance where neither of us knew which role we would be dancing for the next time through until the very end of the swing.  This proved confusing to our shadows as they weren’t always going to meet the same people (as a matter of courtesy if you’re going to switch in a dance which has a shadow interaction you let them know beforehand).  Interestingly, this dance was still called using “Ladies” and “Gents” as role descriptors.  One thing at a time…

My next encounter was at a birthday party where both the celebrants were leading members of the Lavender Country and Folk Dancers (lcfd.org), an organisation of gender free dance clubs.  Originally created to provide gay dancers with a safe place to dance, it now provides gender free dancing for all.  Whilst many of the guests at the party were seasoned gender free dancers, not all were, and a significant number of people were non-dancers – at least at the start!

The approach the party organisers took was to provide lanyards for people to wear.  They were made from playing cards, with a blue and a red side, on which was attached a Heart (red) or Diamond (blue) shape – Hearts and Diamonds being their designated role specifier.  The idea was that you chose a role to dance, often in agreement with you partner, and set your lanyard accordingly.  This served as an indicator to other dancers and reminder to you – and if you changed roles mid dance you merely flipped your lanyard.  It worked very, very well, with both dancers and non-dancers taking it effortlessly on board.

So that’s the US – what about the UK?  Well, what do you think?  What does your club do?  Does it have an agreed approach to “dance any role you like”?  Has it even considered it?  Do let me know…  dance@devonfolk.org.uk